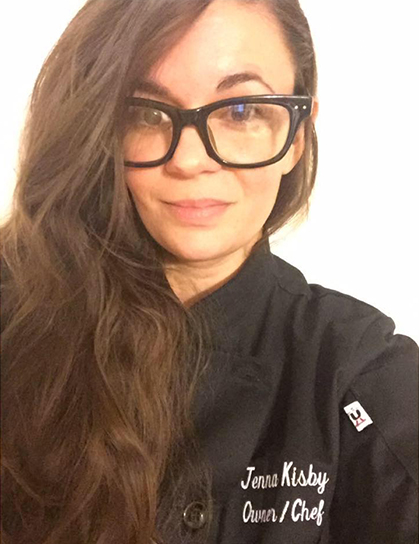 Jenna is the founder and owner of Kizbee’s Kitchen, which was established in 2013 and opened it’s first retail location in June 2015. After graduating with Bachelor of Arts Degree in Psychology from Loyola University Baltimore and working for a few years as youth case manager, Jenna ultimately decided to follow her true passion – gluten-free baking.

Jenna has been gluten-free since 2008, and lives a strict gluten-free lifestyle. In 2008 she quickly realized there was a need for great tasting gluten-free options in South Jersey and beyond. Soon after she began the development of Kizbee’s Kitchen. After 2 years of research and development, Jenna developed the proprietary flour blend found in most of Kizbee’s baked goods-  it’s Kizbee’s best kept secret!

While Jenna is most known for being the owner and operator of Kizbee’s, she also sits on the Academic Advisory Board for both the Academy of Culinary Arts at ACCC and the Atlantic County Institute of Technology. She has given presentations and baking demonstrations for several organizations including the Children’s Hospital of Philadelphia Celiac Group, Celiac Support Groups around NJ/PA, the Professional Chef’s Association, and the Move Something Conference.  Jenna continues to change the way people view gluten-free food through both her bakery and presentations.  “Gluten-free food can be just as good, if not better than other food – we just need to raise our standards.”

Visit our online store where we sell a variety of allergy-friendly baked goods.

When we return in March our books will open for we

Drop a comment and let us know!👇 #newjersey #g

Wishing we had some Chesapeake Buttered Biscuits t

Happy New Years! 🎉🍾 From everyone on the Ki

LAST CALL BEFORE WINTER BREAK! Everything is on sa

Did you know that all our fresh baked loaves are v

Jumbo slice of Black and White cake anyone? 🤔 D

The best breakfast is back! Cinnamon buns donuts a

Today is the start of our final sale week before o

Check out our FINAL store hours before our winter

This weekend is your last chance to get all things

We are currently delivering on the first Friday of each month.

Pickup is offered 7 days a week at our retail location & all of our farmer market locations throughout the year.

(On the corner of Cologne Ave. and Rt. 30, next to Gilchrist and across from Bulldogs Bar and Grill).